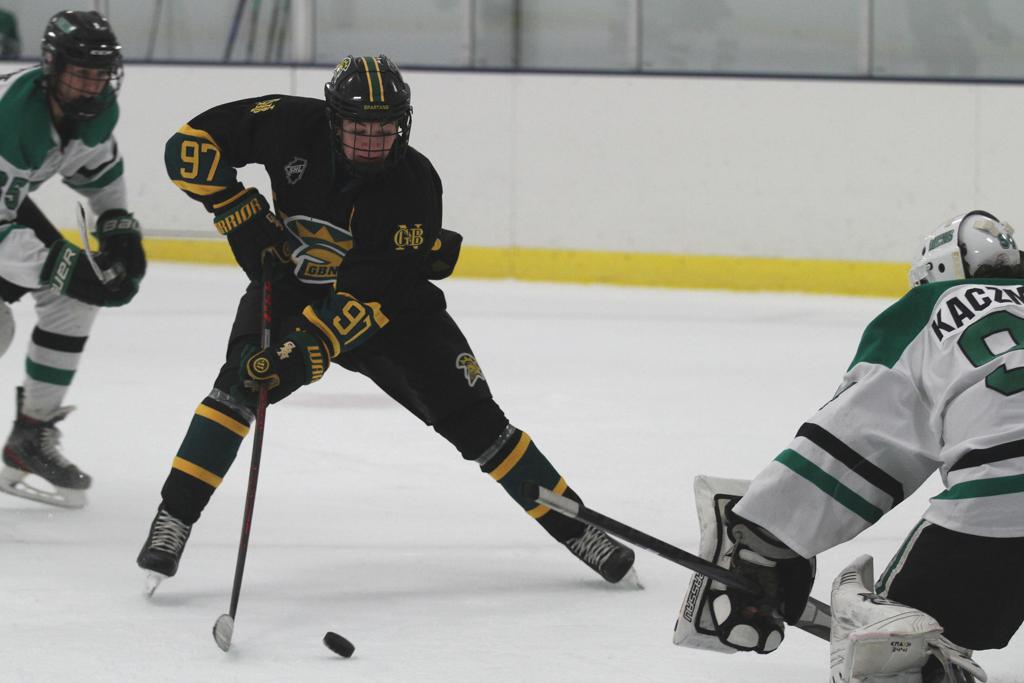 NORTHBROOK -- York pulled a monkey off its back and left it sitting on the ice at Glenbrook North on Sunday.

The reason for York’s sigh of relief? The Dukes won their first SHL overtime game in five tries this season. After regulation and overtime couldn’t decide the second day of back-to-back games between the Dukes and Spartans, their 1-1 tie went to a shootout.

The Dukes got off the schneid when Sam Kamienski converted his shootout attempt, and goalie Adam Kaczmarek stopped Glenbrook North’s ensuing shootout try to secure the win.

“It’s a Sunday afternoon, we got a monkey off our back, and I’m proud of my teammates and how hard we worked,” Kamienski said. “We’re working hard and we were due for a win.”

Glenbrook North’s Lev Vaynberg-Movchan buried an unassisted goal with six minutes remaining in the first period and York didn’t give up another goal in the game. North also scored four goals in the third period in a 6-5 win at York on Nov. 12.

“The past two games we played against them, they scored four goals in the third periods,” Kaczmarek said. “It was nice to get a good third period going against them. Sometimes our defensive coverage isn’t the best but I thought we did good on that today, and we brought some good energy.”

York posted a 35-27 edge in shots over Glenbrook North, which has been playing and defending well as it works towards putting more pucks in net. North went into Sunday’s game having won four of its last five games, and two of its last three against SHL competition, including a 3-2 win over Stevenson.

For North, the difference between Saturday’s win and Sunday’s loss to York came down to offense.

“They were similar games but we created more offense yesterday in the third period,” Poulakidas said. “I didn’t think our first line played particularly well today. That line was terrific yesterday and today, honestly, they were just average. I thought that was the difference in the game.”

The first period on Sunday saw scoring chances both ways, with York earning an 11-10 edge in shots. North’s Josh Genin and Ryan Sandler found a pair of shots early on, while York’s Greg Lee and Chuck Colantonio took swipes to the the game’s 8-minute mark.

Kaczmarek stopped North’s Owen Just on a breakaway and then North’s Ryan Rossi, before Vaynberg-Movchan went in alone and buried a backhand from point-blank range at 6:00 to give the Spartans a 1-0 lead.

The game stayed largely even in scoring chances both ways in the second period, with Karchmar and Kaczmarek up to the task. but Glenbrook North got whistled for six penalties in the period, and with 2:05 left in the period, it caught up to them.

York was on a 5-on-3 power play when Plummer buried a wrist shot from the left side to tie the game.

Plummer spent the weekend locating good looks on net and he finally got a payoff on Sunday.

“Bobby Plummer had a lot of chances in both games and he probably hit five crossbars,” Boeing said. “Nine out of ten times he’s going to score in those situations but the hockey gods (largely) prevailed on him this weekend. It was good to see him get rewarded.”

Poulakidas saw it as a pivotal shift in the game.

“That second period really hurt us, with that 5-on-3,” Poulakidas said. “I thought 5-on-5 we were fine but that kind of took the wind out of our sails.”

Kaczmarek stopped Genin during a North power play and Karchmar made a point-blank save on York’s Nico Ptak near the 9-minute mark. Kaczmarek gloved a Rossi shot with 16 seconds left in regulation.

York posted a 3-1 edge in overtime shots and Frank Nicosia kick-started that edge.

“(Nicosia) was great on the dot today, especially in overtime, a lot of good draws,” Boeing said. “Overtime is huge with possession so that first draw is huge. Brendan Quinn was good again today and Elijah Maurer is a junior and he’s the fastest kid on the ice and the hardest-working kid on the ice, and he won every puck battle.”

GAME NOTES:
Glenbrook North
The Spartans are defending well, with Burke in the thick of things and another big, physical presence at play over the weekend.
“Outside of Burke coming alive, Tobey Downing — who’s had a lot of injuries — he’s like 6-foot-3, he has really solidified our defense, and he can bring some offense, too. When he plays well, he’s a force, and he was really good yesterday and he was good today.”
North’s scoring has picked up after some recent struggles but the Spartans know that if they’re going to compete for the SHL crown this year, they’ll need to be even better.
“New Trier and Loyola are tough matchups for us because they’re capable of scoring, and no matter how good you play defense you’re going to have to score two or three goals to beat them,” Poulakidas said. “That’s just the reality.”

York
Kamienski decided to change things up some prior to his shootout attempt
“I told my coach right before that I was going five-hole the whole way,” Kamienski said. “That’s usually not my move but I was feeling the speed and made a quick shot. It’s all feel. Against Stevenson I went with the fake shot and didn’t work, so I decided to mix it up and it worked out well.
“We’ve been struggling to finish games out and I’m proud of the way we finished out this one. It was a great team effort.”
Boeing was happy for the benefits his team reaped in on Sunday, for reasons beyond wins and losses.
“It’s all about that confidence and you build that confidence with experience,” he said. “That’s the first time we’ve won in a shootout and now that we’ve got that monkey off our back, we can go into that situation with more confidence.”

588 Days. Like all of you, we’ve missed the smell of the rubber mats, the shine of a fresh sheet of ice, and the sound of sticks knocking on the boards. It’s been 588 days since the SHL Network was last on the air, and that streak ends Thursday night. We couldn’t be more excited for the return of the SHL Game of the Week for the 2021/2022 season and in a time where many you may rely on our broadcasts more than ever, we’re looking forward to bringing the highest quality broadcasts to you.

Over the past 4 years, the Network has evolved from simply getting games online to now having HD quality streaming, multiple broadcasters, rink side interviews, replays, graphics, and highlight packages. In year 5 of this great crew, we have even higher sights set on the content we’ll be able to deliver to the great fans of the SHL. We have some exciting events and opportunities on the horizon, more on those in the coming weeks.

This season, more than any before, the SHL Network team knows what it means to be able to see top league games without having to be in the arena. This is a role we’re happy to take on, and continue the great tradition the SHL Game of the Week broadcasts have developed.

Below you’ll find the complete SHL Game of the Week schedule for the 2021/2022 season. As always, we love meeting the fans who follow us most so if you find yourself in the arena please feel come say hi before or after broadcasts.

While times are different, we hope the familiar voices of Max, Taylor, Tyler and more bring you back to that same feeling: Hockey season is back, and so is the SHL Network.

Varsity will play a home game against the Loyola Gold on Wednesday Dec. 8th at the Northbrook Sports Center at 6:40pm. The game will also be streamed live on the SHL network as the game of the week. 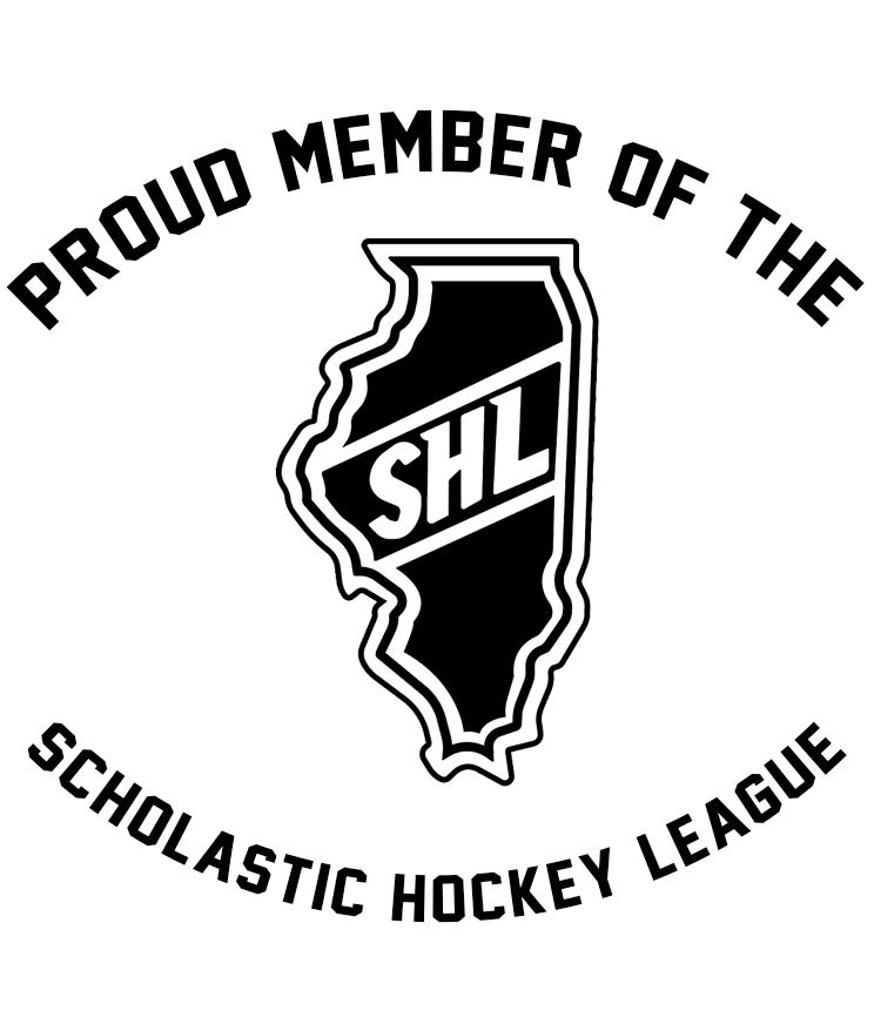 GBN Hockey is a proud member of the Scholastic Hockey League. Please click on the photo above to visit the SHL website

Click this link to register for the GBN Alumni game. We look forward to seeing all the alumni.